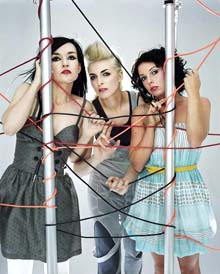 We recently spoke to Victoria from the band about death, discos and "those two perverts" Trinny and Susannah…

Death question! How would you like to die?
I wouldn't like to die, dying is something I try to avoid because I plan to live forever. I’d quite like to find the secret to eternal life but these days we're all too busy making music to go and discover anything. Maybe if we sell enough records we will be able to afford loads of surgery and then we might never die.

Disco question! Kylie once sang 'Your Disco Needs You'. What would a disco be without Kylie?
I am obsessed with Kylie. It's not so bad that I have Kylie bedcovers or stuff – although saying that I'd love a Kylie duvet, but every disco needs Kylie. I'm the same height as her you see and that's where the addiction started. I'm a bit dis­ap­poin­ted by the leaked songs from her new album, though — they're a bit rubbish. We just did a song recently which acci­dent­ally ripped off Kylie's 'White Diamonds' but I would like to assure you that it was
just a coincidence.

Death question! Dead flowers are sad but beautiful. What else in life is sad but beautiful?
Britney Spears. I think she is very sad but then she is also very beautiful. She cracks me up though — she is so much better since she went mental, it's brilliant. I still don't think she'd regret cutting her hair off. She'd do it again in an instant.

Disco question! Are smoke machines better than strobe lights?
Smoke machines affect me and strobe lights make people have epileptic fits so neither should be in a disco because they are both dangerous and likely to cause death.Saying that we use strobe lights in our show — we have flashing skulls on our guitar and a lightbox we made out of MDF. We're always building things when we should be recording. I'll phone Lucy about new songs and she'll say "hang on I'm just on the jigsaw". Never mind the album, lets just get the lightbox finished — right?

Death question! What's the oddest colour you've ever 'died' your hair?
When I was at college I would dye my hair a bluey/purple colour and get it all round my face and hands and it would stay there for weeks. People called me Violet Beaureguarde. "Here comes Violet," everyone used to say…

Disco question! Is it good that people can't smoke in discos any more?
Of course. I have a medical thing with smoke, as I just mentioend. If I go near it I start choking up and as a vocalist you obviously shouldn't smoke anyway.

Death question! What will be on the buffet table at your wake?
I'd probably have a table covered in newspaper with fish and chips piled up on it for everyone to get in and get dirty with. Maybe with Party Rings on the side.

Gillian McKeith might have a few things to say about your buffet spread.
Is she the one who looks at people naked?

She is the one who pokes through people's shit.
The ones who go to someone's house and clean it up?

No.
I don't have a telly. I know who I'm thinking of, those two perverts who make people get naked behind a screen – Trinny and Susannah. Did you see the one where the guy got a boner? It was hilarious. But we were talking about this Gillian McKeith – what does she do?

She puts junk food all over people's tables to make them cry and if that doesn't work she'll build a chocolate coffin and put a man made of lard inside it.
What a waste of food. There are people starving in Africa and she's piling up tables of food and saying you can't eat it? What a bitch.

Disco question! What do you do when you've lost a cloakroom ticket for your coat?
I lose everything. In the last month I've lost my purse twice, my phone three times, my house keys once and my car keys twice. I lost my real car key and the spare one — I had to have my car towed away to get a new key pro­grammed for it. As for cloakroom tickets, I find them even easier to lose. When I do lose my ticket I try to sweet-talk the people running the cloakroom unless I forget I was even wearing a coat and then have to go back the next day and knock on the back door.

Death question! Have you ever seen a ghost?
I don't think so. I have a really vivid ima­gin­a­tion and when I'm driving in my car on my own I always imagine that there are people in the back of the car or in the middle of the road but none of it is real. I'd probably quite like to see a ghost, I like the idea of them and I love 'Most Haunted', espe­cially when Yvette Fielding gets possessed and starts swearing. It's the one reason to own a TV.

Well… (Popjustice explains)
It sounds a bit sick. Why would you take a dead man to the beach?

Disco question! What sort of biscuits would you most like to take to a disco?
Is this some kind of secret term for drugs? I've never taken drugs in my life, I don't under­stand them. I'd probably stick to Jammie Dodgers. Jammie Dodgers are great because that is NOT real jam in them, it's just a chemical that makes you feel good. It's not real jam, it's not real cream and that's not even real biscuit. Actually what the fuck is it?

Thank you very much Victoria.

The chatter of Popjustice 18