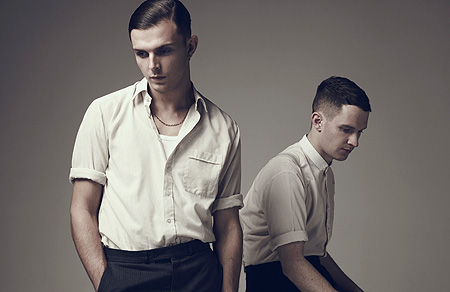 As has been plen­ti­fully doc­u­mented over the last year, we are large fans of Hurts. Here is a chat with Theo from that band.

Where are you, Theo?
I'm in Dublin, in front of a wall that says 'WAR IS MURDER' in massive letters.

Does being in Hurts mean that you always have to choose bleak 'n' moody phone interview locations?
(Laughs) Most of the time, if possible. Sometimes to balance it I try to go to a ball pool or a balloon shop just to offset the mood. It's black Mercedes Benzes and grave­yards most of the time though, obviously.

About this 'persona' of yours. Let's say you and your lady­friend are off to a party at one of her friends' houses, and before­hand she goes, 'now Theo. You are going to talk to them this time aren't you? This isn't going to be a repeat of last time, is it?'. And you say, 'yes my dear it will all be fine'. Then you just stand around all night, half in the shadows, saying nothing with your head at an 18 degree angle. And then after­wards all her friends go 'you know your boyfriend Theo – he's a twat'. Is that what usually happens?
Well contrary to popular belief, we're very different to how it may seem in pho­to­graphs. And it's like people think we write sad music. We don't! We write happy, hopeful music. If we did walk around frowning all the time I don't think we'd make the music we'd make. I think — per­son­ally — that there's a slight tongue in cheek element to what we do. Obviously we take what we do seriously but you can't take it too seriously. I think the fact that we've obviously crafted it means that people can relate to how we come across. Nobody's that miserable – and you can't relate to people who are actually miserable all the time. I think a vision of something slightly dark is more appealing than something actually dark.

When you and Adam played the Popjustice night at In The City in 2008, as Daggers, you mentioned that it was your third In The City in the row as an unsigned act. Clearly nobody was inter­ested. For the benefit of other acts going abso­lutely nowhere, how did you make people inter­ested?
I guess what we did was at the point where we were about to throw in the towel, we didn't. So my advice would be don't be afraid of change. If you change as a person, don't be afraid to throw everything out of the window. Be brave. A lot of bands are so stubborn in their vision, and they're like 'it's ten years down the line, we make music that sounds like Space and Cast, why isn't anyone signing us?'.

Do more artists need to admit that they're wrong?
Not neces­sar­ily admit they're wrong but perhaps look around a little bit and be willing to adapt, I think. We adapted for ourselves because our personal tastes were changing. Rather than resist that we embraced it. And even though Daggers was a three-year-old child, we abandoned it.

Three-year-old children can usually walk, and if you can walk you can fend for yourself.
Exactly. Put them in a suit, let them get on with it.

Do you think it was a bit of a rum old do that you set Hurts up as being one thing then unveiled yourselves as something else?
What do you mean?

Going 'ooh we're all gothic and mys­ter­i­ous' then releasing a balls-out elec­tro­pop ditty as your first big single.
The funny thing is that we always knew what we had and what we wanted to be but because we chose to let out very little it wasn't always obvious. When we gave out 'Wonderful Life' some people started writing the album in their heads, then when we put out 'Blood Tears & Gold' they went 'well THAT'S not on the album in my head', and then the album in their head adapted. And then of course there was 'Better Than Love'. In our heads there were always three pillars to what we were doing and we let them out very metic­u­lously so that they even­tu­ally gave the whole picture in three songs.

But not in the medical sense.
No. It is a stool upon which Adam and I both sit. Possibly on each other's knees, possibly next to each other with one cheek on, one cheek off. And the legs need to be the same length or else you get problems. You can't just wedge a piece of paper under one of them.

Is what we see and hear from Hurts now, with its quite precise look and feel, what Hurts are really about in the longterm, or will your next album sound and look quite different?
Well we started very simply. And it's something that has grown. It's a very different thing in our heads now from what it was a year ago. When we made that decision to cut one idea off and start a new one it was very exciting. I think it'll change and grow and always be Hurts but it might depend on where we make the next album – if we go to Barbados or Tenerife it might be different from minus-twenty-degree Gothenburg and rainy Manchester. The good thing about it being pop music is that it can change and grow. All the best pop artists change and grow quite visibly, which I think is important. It excites people more. If you make gradual changes people learn to like it but if you're Madonna or Prince and you make big changes while still being Madonna or Prince at heart that's more appealing. For now I'm just kind of excited about finishing the first one.

The phrase 'get on with it' springs to mind.
Yeah… (Laughs) And obviously I'm excited about starting work on the inac­cess­ible second album. Why would you waste your time with tunes when you can just write a load of inac­cess­ible weird music for your musical friends?

Regarding the claim that you're not making sad music because you're making hopeful music, do you not think that often hopeful music is the saddest of all because ulti­mately the listener knows that everything will probably end in disaster and distress?
I think hopeful music is more poignant for that very reason, and resonates more. Overly sad music and overly happy music have very little effect on me because incon­sol­able despair and oh-my-God-paint-my-face-neon-and-give-me-five happiness are such unob­tain­able emotions. That said a lot of the Daggers songs were quite fant­ast­ical in their lyrical content, I suppose. And perhaps that's why Hurts has worked, because in Hurts we're confident about writing about normal things. It's tempting to think, 'why would I write about the everyday? Surely that's just going to be boring?'. But even­tu­ally, as it turns out, it resonates a lot more. So perhaps hopeful music can be sad, but it can also be happy.

In the same way that sad songs can have often have a sense of optimism about them because things, as someone once said, can only get better.
Yes.

That was a good song.
I know. And now one of them's a scientist!

You see that's a dramatic twist nobody saw coming. One minute D:Ream are knocking out whimsical disco pop hits, the next one of them's off bringing about the end of the universe. And that's the thing with Hurts. The songs are fine and the look's pretty good but are you, at the end of the day, going to literally be respons­ible for The End Of Days? Answer: probably not.
That would be good for inter­views though. 'What was your aim when you set out?' 'Oh, we just want to make music that will end the world.'

And if anyone else likes it that's a bonus.
Exactly!

Is it true that the deal you did was one of the UK music industry's most obscenely massive for several years or is that mis­in­form­a­tion?
I don't know very much about the record industry so I wouldn't know… The most important thing is what we included in our record deal, which was a comb and an umbrella and two tickets to the Eurovision Song Contest. Which haven't arrived, actually, so whether the album gets released or not might be hanging in the balance.

So if your label don't deliver your Eurovision tickets can you walk away?
Yes, that means the contract is null and void. The album doesn't get released. Although we got the comb and the umbrella which was great because for a long time I was wandering around with messy hair and Adam got wet a lot.

Nobody wants that in a pop group.
No. I mean the last I heard about the Eurovision tickets was 'we might have tickets', and I was like, 'well we've got to finish the album next week so let me know if it's worth bothering'. So watch this space.

'Better Than Love' is available to purchase now. Here it is on iTunes; more info at Hurts' official site.

The only problem with the Professor Green and Lily Allen single…

The Wanted — 'All Time Low'