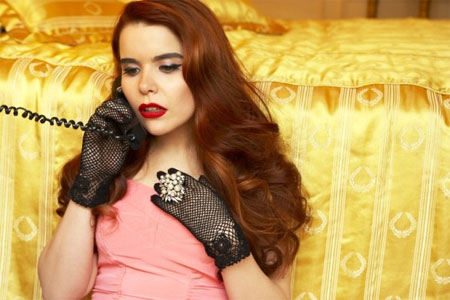 'New York' by Paloma Faith: the song so good they released it twice.

To mark the special occasion of the tune's second time around the block we decided to have a chat with Paloma. Well we say chat, it was more of an argument.

Hello, Paloma.
(Without a moment’s hes­it­a­tion) I’ve invited you so many times to my gigs FOR FREE and you keep not coming!

Now let’s just clear this up. a) For a start the promise of a free gig, pleasant as it is, is not exactly ‘big wows’. b) You do play quite fre­quently. What you need to do here, Paloma, is limit supply. Not neces­sar­ily to say there’s too little demand, but there’s perhaps too much supply. You need to space your gigs out so they seem like a special event, so that when you do offer someone tickets they go ‘this may be the last chance I have THIS WEEK to see Paloma Faith — I’d better go’.
(Sniffily) Well I can’t be bothered to invite you again. It’s your loss. I KNOW I’m an event because my gigs are different to everybody else’s. So I don’t need to space them out to make them special. I make every show different.

Do you though? Do you really?
Yes! I do set design! And I do different struc­tures of per­form­ance and all sorts.

Well that’s a good idea. It’s good if people know there’s something different for each show — getting audiences to come back is the important bit.
Well in your case it’s difficult to get them there once!

There was a point when you publicly invited @popjustice on Twitter and we said that would be nice and then we realised we wouldn’t be able to go, and we sort of hid. There was pressure, we didn’t know how to handle it, we ran away.
That’s very male of you. Don’t worry, I won’t invite you to one of my gigs again.

Now you’re playing hard to get and we’re starting to want to come. THIS is how it works: reduce supply. Increase demand.
I’ll keep working on that. Sorry to bring this up early on.

I think it’s better out than in.
It was my mum that asked me to invite you. She adores you. My mum just thinks you’re the finest person that ever lived.

Well as the saying goes, ‘mum knows best’. What does your mum do?
She’s retired now. She’s 63. But she just thinks you’re the best person in journ­al­ism. (Chortles) And she was going ‘you have to invite him, you have to invite him’, and I was like, ‘he doesn’t want to come’.

She was right. When we met before Christmas, when we were both on the Radio 1 Review Show together, you were, as the saying goes when one attempts to describe rude people, ‘refresh­ingly honest’.
Well current popstars don’t really say anything but through­out musical history they used to. The people I admire used to actually say something but people just sit on their haunches now.

Do you know the problem with Bob Dylan?
What.

Too much mumbling. Speak clearly Bob! If you’re going to say something important, a) get your haircut, b) SPEAK CLEARLY.
You need to get the Bob Dylan lyric book and digest it in your own time.

That would help when attempt­ing to sing along, to his singalong hits.
He’s got longevity, definitely.

Do you have longevity?
I wouldn’t like to say, the thing is it’s too premature for me to guess. I don’t like to bang my own drum, that’s not really my style. I like to at least pretend I’m modest.

You’re saying that but I call your attention to Exhibit A: a pho­to­graph of you on stage at Glastonbury almost being lifted off the stage by two massive helium balloons. That doesn’t scream modesty. That screams “LOOK AT ME”. It screams “LOOK AT ME I’M THE ONE WITH TWO MASSIVE BALLOONS ON MY BACK”.
But I think anybody who’s a musician who pretends they’re all downbeat and stuff, they’re all desperate for attention. Any musician who tells you that they don’t like the attention is CHATTING A LOAD OF SHIT. The dif­fer­ence is, I’m honest about it. And yes I will buy two four metre by four metre helium balloons to prove that point.

Do you know what that balloons thing at Glastonbury looked like? You know when Twitter’s over capacity and it’s got the fail whale being lifted by the birds?
I don’t have that problem on Twitter.

So you are rereleas­ing ‘New York’, yes?
I’m sighing. (Sighs) I’m sighing at that question. Oh dear. To be com­pletely honest with you that’s gone out of my control now. And if you wanted to know, I quite fancy getting on with the next album, but the powers that be dictate what I do right now.

Thing is, only about 100 people bought it when it came out before, so it deserves a wider audience.
What I love about it is that ‘Empire State Of Mind’ came out twice as well. (Laughs)

What you need to do is put a rapper on it for the re-release. It would be like the ‘Empire State Of Mind’ campaign in reverse. Get in a generic rapper. Actually that would be quite a good identity for a rap person — call yourself Generic Rapper and attempt to get on as many records as possible, Pitbull-style. You could also have a David Guetta-esque producer called Generic Dance Producer.
Now do you really love all that sort of thing?

When he is good, for example ‘I Gotta Feeling’, he is very good. Whereas ‘Sexy Bitch’ is terrible in a variety of ways.
I did a version of ‘Sexy Bitch’ for the Live Lounge.

When did you last fall over in the street?
I do it daily. I’m very clumsy. Actually I was talking the other day about how it’s not very good that people laugh when other people fall over. What if that person fell then hit their head and died?

Basically, take the end bit off the video before you put it on YouTube.
(Laughs) Yes I suppose so! Because you don’t have Jeremy Beadle to send your videos to any more, do you? I remember it was £200 for one of those if he aired it!

What I am saying is that your knowledge of Beadle-era You’ve Been Framed dates you at 26.
You think I’m 26? How does a 26-year-old differ from a 24-year-old?

They’re still quite carefree but they’re getting a little bit more anxious about the world in general.
So I’m carefree yet anxious because I can see the impending future.

Yes — ‘shit’, as they say, ‘is about to get real’.
Hence my reasons for going on daytime tele­vi­sion? I’ve been on Alan Titchmarsh, David Dickinson, GMTV, This Morning…

Blimey. If you were playing Daytime TV Bingo you’d be shouting ‘HOUSE!’ right about now.
I’d have the full card! (Laughs) I met Ronnie Corbett the other week, I thought that was a very  big achievement.

That is an achievement.
I might even go as far as to say that meeting Ronnie Corbett has been the highlight of my career so far.

If one of them were to bum the other, who would be top and who would be bottom?
I reckon Noel would be the giver and Corbett would receive.

You wouldn’t want to see Noel opening THAT box.
Are you just going to quote me in this interview so that it looks like I came up with that ludicrous thought?

That will be the quote that is sent out to news agencies.
‘PALOMA FAITH THINKS ABOUT NOEL EDMONDS BUMMING RONNIE CORBETT’.

What would be your tabloid-friendly descrip­tion? Flame-haired balloon-wearer Paloma Faith?
I like ‘flame-haired’. ‘Balloon-wearer’ is a bit clumsy, language-wise.

But you have worn balloons. It’s factual.
It’s not very poetic.

Life isn’t poetic, Paloma. You just need to make the best of it. What’s the ‘story’ going to be for the second album?
The story? I think more agony and suffering. But I’m hoping this next album will be done with just one producer.

Rather than how your first album came together, which was to try you out with literally anybody who’d do a track then hope for the best.
Yes. I don’t want that this time, I want a solid piece of work. I love the beautiful side of things like that Tom Waitsy, Rufus Wainwrighty, Ed Harcourt sort of stuff, and in contrast I like all the OutKast pro­duc­tion, Gnarls Barkley and ‘Beggin’’ and all that sort of sound. Contemporary but with a nod to the past. But you never know. You might just meet someone and something else would make sense.

Cut to: someone at your label, on the phone to David Guetta.
(Laughs)

Have you done any good songs for your second album?
No, they’re all shit.

At least it won’t surprise the people who bought your first album.
Oh thanks for that.

How do you think this interview has gone?
I think it’s gone well. Your interview technique makes me a bit nervous.

The thing you’ve got to remember is that no matter what happens with the ‘New York’ re-release, you’ve got a musical career that spans two decades. The 2000s and the 2010s. How’s that for an impress­ive stat?
You’re just building me up to take me down.

Only you can take yourself down. Why do you think we want to take you down? You’ve got good songs! Your album was good!
Oh thanks. I imagine that the next one will be better.

*
Good old Paloma Faith. 'New York' is out (again) now (you can buy it here) and here's her official website.