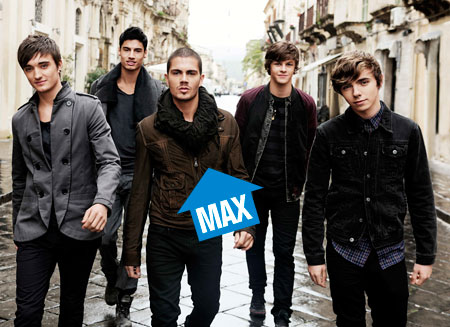 The Wanted are a new boyband. They're signed to Geffen, their first single 'All Time Low' is out in July. Here is an interview with Max from the band — he used to be in Avenue so he has 'previous'.

How did your media training go?
It was sound, yeah. It was good.

What did you learn?
Well basically it was like, we had to sit down and they put in a radio sort of interview situation sort of thing and they’d ask us questions and we’d have to see if we could answer them sort of on the spot without sort of hes­it­at­ing or saying the wrong thing. He was asking us like simple things! Questions like what’s your ideal girl! And then it would be like, “er…”, but you’re supposed to just answer straight away!

Is there going to be the tra­di­tional boyband problem with questions like that due to band members being gay?
None of us are going to have that issue.

It says on your indi­vidual profiles that you all like football! “It’s alright ladies – we’re straight.”
Yeah we’re all into our football. Three of us espe­cially but the other two are more into sort of music and stuff but I’ve twisted one of their arms into becoming a City fan.

Well, let’s call it a fortnight. Anyway we didn’t speak then but The Wanted feels like it might have more of a chance of working. From your per­spect­ive what went wrong with Avenue and what have you learned?
I think this time I’ve learned to put more in myself rather than be told what to do by people. It’s good to have your own involve­ment, get your views across and your opinions, because at least if you can say your opinions, they don’t have to listen but at least you’ve put it forward. Even when we didn’t want something [in Avenue] we didn’t speak up. With this one we write our own songs in this group and we didn’t do that before.

When you say you write your songs now do you mean that in the sense that you as a band of five guys goes into a room and emerges a few hours later with a single, or are you co-writing with pro­fes­sional songwriters?
Well, both, we’ve co-written and written songs for the album. And some were written for us.

Of those tracks, are the better songs the ones that other people have written for you, and are the not quite so good ones the ones you’ve done yourselves?
Er… I’d say it’s a mix really. It’s a mix.

Let’s talk through the singles that are coming. The first single sounds really good. It starts off as one thing then changes a bit and ends up as something com­pletely different. Where did that song come from?
That song was from Steve Mac and Ed Drewett.

Where will people know Ed from?
Er, I don’t know, I do know that he’s signed to EMI [Publishing]. That’s all I really know about Ed.

And what do you see the second single being?
It depends, I mean there’s a couple… 'Heart Vacancy' I think is def­in­itely going to be single. I don’t know if it would be second, if we get… I mean fingers crossed the first one does alright…

So the idea with The Wanted is that you’re an in-inverted-commas proper boyband, rather than the sort of boyband who goes ‘well actually we’re not a boyband’, is that right?
No, we’re not going to say we’re a vocal harmony group because at the end of the day people will look and go ‘well you’re a boyband’. And we are a boyband. We’re not going to try and hide from that.

What would you say you target demo­graphic is?
Like what do I think our target audience is?

Who’s going to buy your music?
I’d say the younger sort, twelve to eighteen. That would be the pre­dom­in­ant age. But I think we might appeal to an older… Well we’ve got one song with an Ennio Morricone sample in it from ‘The Good, The Bad And The Ugly’, and all the mums and dads and older brothers and that say that it’s their favourite.

A lot of twelve-year-olds won’t remember any boybands other than JLS, but who would you compare yourself to?
Er… I’ve never really been much of a boyband fan myself…

So are you going to be playing instru­ments, then, or dancing?
Well we’ve worked with Brian Friedman who’s sort out some sort of staging so we’re not just stood there, but we’re not five dancers. There’s nothing full-on.

So imagine someone toddles along to see you on tour. What do they see on stage?
Erm, well, they’ll see sort of staging and a couple of little cho­reo­graphed moved and bits of songs, subtle movements more than anything. And we’ll be singing 100% live and that’s probably about it!

Will one of you be playing an acoustic guitar, perhaps for a ballad?
Yeah, if we’re doing a full gig we’ll def­in­itely play a couple of songs. Siva plays guitar, Tom plays guitar, I play a bit of guitar and Nathan plays piano.

So there would be quite a lot guitar and piano.
Yeah.

So it’s quite a mature approach to things?
Well I suppose on a couple of the songs, if you want to call it that…

It seems quite odd looking through your indi­vidual profiles that none of the music you choose to listen to sounds very much like the music you make as a band. Is that odd?
To be honest I think that we just sort of write whatever’s in our heads at the time. I don’t think what we do is just influ­enced by what we listen to. Just whatever ideas we sort of come up with.

Not par­tic­u­larly liking a type of music doesn’t mean you can’t make it for other people.
No, def­in­itely not.

When Avenue came out there was lots of excite­ment about ‘ooh boybands are back’ but boybands weren’t really back and it didn’t work. Now of course there’s JLS, so you could argue that boybands are more back than they have been for about seven years. Are you a rival or a com­ple­ment to JLS?
I don’t see ourselves as rivalling JLS, I mean JLS have abso­lutely smashed it. So fair play to them, like. We just wanna do what we do. We just want to be ourselves, know what I mean? We just want to get on with it and see how we get on.

And in terms of how you do for yourselves, how do you see that panning out? Where would you like to see the first single go in the charts?
Well I’d love to see it go to Number One.

Okay.
But, like, it’s so hard innit? I’d love it to be Number One. Top 5 would be awesome.

Your label will pre­sum­ably be hoping for a Top 5.
Yeah and you know it’s a big label and they have high expect­a­tions of us and that. But that would be awesome.

If it did all go a little bit tits up, and you didn’t go in the Top 5, or in fact in the Top 30, what would be your next move?
God knows, we’d probably have to ask the record company but I’m guessing they’d probably call us in for a meeting and it would probably be quite a short meeting.

This is the voice of experience.
That’s my exper­i­ence, yeah. But I do know that they’ve got a lot of faith in us so it might be different.

Well you pre­sum­ably also have more good songs that you think could do well for you.
Yeah, I think we’ve got a few on the album. A few that could be singles. And I think the guys at the record label think so to.

If JLS fans are JLSbians, what are The Wanted’s fans going to be called?
I don’t have a clue. On Twitter there are some groups that have made up little names and stuff, like ‘The Wanted Girls’ and whatnot.

Do you think The Wanted is a good name for a boyband?
Yeah, I don’t mind it. I like it!

Surely Wanted is better than The Wanted. What do you think?
To be honest, there were so many names we went through that when we came up with The Wanted we knew it was a good one.

It’s good, but it’s better without a ‘The’.
I don’t know what the worst one was.

The Wanted's MySpace is a place where you are able to find more inform­a­tion about Max and his The Wanted chums.