An interview with Kelis 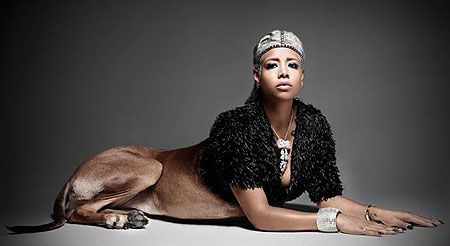 She had some records out in the past. Most were of fairly high quality. She's got a record out at the moment. It's better than most of the other ones. And she's on the phone.

Is that down to what we might term the ‘fucking hell it’s Kelis’ factor?
Yes there is that.

Are these tracks ‘the new you’ or ‘the you all along'?
I suppose they’re the new me for now and hopefully I’m ever changing.

What are you being offered with your new label deal that you haven’t been offered before?
Ah – that’s a new question. Well, I did a deal for this album honestly more for part­ner­ship than money. I wanted to be a partner in my contract which is new and rare I think, so I’m signed but it’s not as much like a slave and master deal as in the past. It’s pretty amazing – I’ll get my masters back even­tu­ally which is exciting because that doesn’t generally happen. I’m really working for myself as well as for my label.

So basically you’re granting your label the privilege of releasing your music until you take it back.
(Laughs) That’s pretty much it, yes. I think honestly, as ever, the music is always exciting but the music business is not. You know, so I’m signed to will.i.am and he’s at the forefront of trying to push the envelope and do something fresh and that’s exciting and it’s been a great union. It’s actually been really relaxing and easy going which is a nice change.

As a producer will.i.am has dominated radio for a long time — can you describe his creative process, and is there something about it that’s made him so bul­let­proof as a producer?
I can’t really speak for him but I do know from working with him that he’s like a musical encyc­lo­pae­dia. There’s not a genre or an era or a song even that you can bring to him that he doesn’t have some sort of knowledge about. He’s a music student. He studies, and he cares. I don’t know how he gets that ways but I know it’s con­sist­ently that way with him – he’s not a musical tyrant like a lot of producers can be. My album was pretty much done when he signed me and he was just like ‘great – that’s wonderful’. And that’s refresh­ing. The word ‘artist’ gets thrown around lightly but I think he’s such an artist – he doesn’t feel the need to control everything but he really loves music, and if you play music to him he’s really accepting of it. That’s an under­rated quality in my business.

When your son gets older and says, ‘well the thing is mum you’ve done very well on stage, I would quite like to be a popstar’, will you say to him ‘well that’s great let me help’, or do you think you’re more likely to say ‘how about taking up woodwork’.
(Laughs) Gosh, I look at him now and there’s no way you can deny he’s musically inclined. I don’t think he can help it! My mom’s someone who helps you channel what you’re naturally best at and I don’t think this is what she would have chosen for me but she’s always been so sup­port­ing that I think I couldn’t help but be com­fort­able in my own skin as a result. So with him is it my ideal choice? No, I would much rather he was a marine biologist or an architect but if he’s naturally good at this I would be doing him a dis­ser­vice not to help him. But I’m not going to be a stage mom, pushing him in front of the camera! As a parent it’s your job to guide them in the right direction so they become the kind of people they want to be. It has to be not because he wants to be a popstar but, in a way, because he can’t do anything else. Because music is all he hears. Do you know what I mean?

Well there is a strain of pop performer who would just as happily be an actress or a dancer, and it seems they lack any real sense of needing to make this work, because there’s always something else they could. Which can seem annoying.
Right – it is annoying. I’m not delu­sional, I mean I don’t have delusions of grandeur in that I don’t think I’m the best artist ever. I don’t! I know I’m the only me there is, but it’s more that the artists I fell in love with from a teenager to now have never neces­sar­ily had the sonically perfect voice, but they’re always the person I believe. It’s people who are saying ‘I could not possibly do anything else, I HAD to get this out’. That’s what makes an artist stay with you. I had to do this because I couldn’t think of anything else.

HANG ON — are you saying that Ke$ha going out and getting drunk once LOL doesn’t really stand up to a song about the birth of your child?
(Laughs) You know it’s not that, it’s that it’s com­pletely irrel­ev­ant to my path. I hope that she does wonderful and sells trillions of records and that’s great, but it has no bearing on my life. I don’t feel like someone else doing well has any bearing on me doing well. I think a lot of people have an issue with other artists’ sales but I don’t do that. I don’t feel like anyone else’s career has any bearing on anything I’m going to do or say. I wear my feelings on my sleeve, I can’t fix it or change it and I have no desire to, and while I hope it does well so I can continue to pay my bills and live my life if it doesn’t it still is what it is. It is what it is.

In the past of course you couldn't under­stand one artist feeling that another artist could affect their sales, because a music fan might only have the cash for one CD so there would have been a choice, one album or another. These days they can just download both for zero pence and spend the money on their dinner.
(Uproarious laughter) Well yes, that is def­in­itely something to think about.

Is it something of a bit­ter­sweet triumph that your new record contract gives you eventual ownership of your masters but we also happen to be at a point in the history of music when that ownership doesn’t really count for much?
They’re worth as much, if not more, because for me to be at this stage in my career and not to have to solely work for someone, that’s worth EVERYTHING. There’s not a dollar amount you can put on that. I can actually wake up in the morning and feel good about what I do and that’s abso­lutely priceless. I’m not going to sit here and spit rhetoric and say to you that (adopts whiny voice) “oh I only make music for myself”, because if that were really the case I’d sing in the bathroom and nobody would ever know about it  and I wouldn’t need to deal with any of the bur­eau­cracy of the music business.

You also wouldn’t have to do inter­views like this.
I wouldn’t! (Laughs) But the reality is that there’s a very fine line and as long as you’re aware of that line you can manoeuvre around it. I’d like to sell records, sure – I don’t want to have to waitress again. But I don’t allow it to dictate what I create and that’s where the dif­fer­ence is.