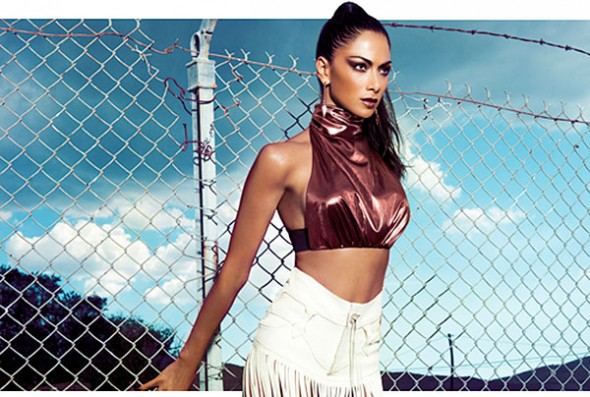 We had a chat with Nicole Scherzinger the other night. The phoneline wasn't very good which sort of put the kibosh on quickfire interviewLOLs.

(Imagine trying to chat someone up from the opposite end of a super­mar­ket aisle and you get the general idea.)

Anyway it was fairly illu­min­at­ing non­ethe­less so here's the chat.

Hello Nicole. Where are you and what can you see?
I'm looking over the Hollywood hills right now, from the window of my house in Los Angeles.

Well that beats a view of a south east London back garden, so you win. What will you be doing in one year from now?
Hopefully I'll be touring a world tour.

Is this already booked in?
No! I've got to create it! I'll have an album out then…

What is there to look forward to on your album?
Right now the upcoming album is just really fun, anthemic, energetic straight dance pop. (Dramatic pause) To the next level!

Well that is one of the best types of pop. Did you handpick your col­lab­or­at­ors or did they come to you?
Actually my friend [CLANG] will.i.am got in the studio and then we put our friend Antony Preston with us, and we kinda just hid away for a month and did this album really fast. I was going away for X Factor and I didn't want anything to steal my attention. So there's Afrojack, a bunch of awesome great people — Sandy Vee, obviously… For the most part it's, like I said, anthemic, energetic dance anthems, and I've got a couple of mid-tempos which are more heart­break songs that I've written with Toby Gad, which is amazing.

Is there any Sting on this album?
Sting? No. He's not. He was on the last album…

Yes he was. This is the track one finds oneself skipping. So it's good news that the new album is a Sting-free zone.
You're not a Police fan?!

The Police were tolerable, Sting is not.
OH MY GOD! STING IS AMAZING! HE'S A SONGBIRD!

A songbird?
What a songbird that man is.

He may be a songbird but you don't want him on your Nicole Scherzinger albums.
(Unsatisfied) Okay…

But other than that your last album was really good. A lot of people were expecting it to be a bit ropey so it took people by surprise.
Really?

Yes!
Well what do you think people thought they were going to think of it?! And why were you surprised?

You know what it's like Nicole. You get a good popstar. Then they throw three songs onto their album and the rest is filler. It happens a lot!
No, no, I had like 50 songs before I narrowed it down to 'Killer Love' and I only chose the best! We came out with like five singles from that album and I think a couple of others could have been singles too.

Correct. Now then, is it the case that you were brought up Catholic?
Yes.

Would you make a good Pope, do you think? There's a vacancy.
Oh! (Gasps) No. I don't think I'd be that good at that job. I would incor­por­ate  a lot of music into the med­it­a­tion and masses, though.

Imagine all the shit you get for being a judge on The X Factor. Complaints about making the wrong decisions and so on. Being Pope would be like being an X Factor judge times one million. Although, you get a hood hat.
I know, right? It's like totally magnified. I did like when Bono gave him sunglasses and he gave Bono his rosaries. That was pretty cool.

If you were to write a popstar rulebook, what would be Rule One?
Be fearless and fierce.

Are there times when fear­less­ness and fierce­ness meet res­ist­ance? How does one manage to be fearless and fierce at all times?
You just keep trucking. And if you're not feeling fearless and fierce, write a song about it. Sometimes I put my trainers on and I go running to get it out of my head; sometimes I just eat a pint of ice cream and watch a movie.

You know your pal Jahmene off The X Factor?
Uh-huh…

One worries for Jahmene and the horrible industry he's going into. Do you think he's got what it takes to keep his head above water?
He def­in­itely has my support — I went to battle for him on that show. People don't realise. He has strong religious beliefs and didn't want to com­prom­ise himself in the business. I basically had to tell the show that he was not willing to com­prom­ise himself to go all the way in the show. I stood right by him and we still keep in contact; I hear from him every week. It's about getting the right team around him because it's a messy, dirty industry and it's hard and he's such a precious little pure soul. But he's also really strong and not to be under­es­tim­ated. He's really bright and he know what he wants. But not only does he know what he wants. He knows who he is as an artist. And he's strong enough and cour­ageous enough to go for that and fight what other people think. That's half the battle. That's way more than a lot of other popstars out there. He was my role model. He's not trying to be anything he's not. He wants to be a gospel artist.

You can tell, often, if people are being honest and direct with whichever persona they're putting across as a popstar.
Yes — when people are authentic and genuine and doing their truth, that's when you want to listen to their music.

Is 'Don't Hold Your Breath' your best song?
(Clears throat melo­dra­mat­ic­ally) It's certainly my biggest-selling solo song. And I love the message of the song. But is it my best song? Well, my favourite song on 'Killer Love' is AmenJena, because I wrote the song.

Which is best out of squares and circles?
What does that mean?

Well you know a square?
Oh, you mean actually a square and a circle? (Without hes­it­a­tion) CIRCLE!

Why?
Because it's whole. Because everything comes in a full circle. It's just more whole. It just has more of a good flow of energy — it feels more complete to me.

Finally, how good is Lewis' album, out of ten?
Well, I'm his girl­friend and I support him [READ BETWEEN THE LINES ON THIS ONE — TACT ED] so I'm going to give him a ten. He's fearless and cour­ageous enough to do music that he loves, and he's writing, so ten out of ten for that.

The mere existence of this album is fas­cin­at­ing. It's hard to imagine what on earth it might sound like.
I think people will be pleas­antly surprised…

'Boomerang', which we acci­dent­ally forgot to ask any questions about or even mention once, is out on March 10; you can pre-order it pon de iTunes now.