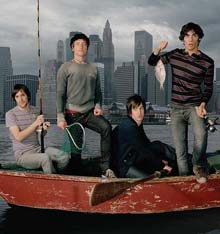 You might think All American Rejects are an emo band but secretly they're not. They'd rather sit on the fence and watch men in tight trousers..

In February, All American Rejects released one of the best pop records of the year, 'Move Along'. No one bought it and it missed the Top 40, which is a great shame because it was, and still is, a brilliant record.

Since then they have tried with other singles including 'It Ends Tonight' which is in the shops this week, although probably isn't going to sell anywhere near as many copies as the new Paolo Nutini single. :(

So, we went along to meet them and made our apologies for the use­less­ness of the British record buying public.

Hello Tyson and Nick All American Rejects. We are here to say sorry for no-one in Britain buying the 'Move Along' single…
Tyson: Thank you. It's the best song we've ever done. But Number 42 just isn't good enough.

You'll re-release it though surely?
Nick: Don't ask us. The record label re-released 'Dirty Little Secret' so why not 'Move Along' again after this one?
Tyson: We're not the ones fucking this whole thing up…

Is there anything Britain can do to make it up to you?
Tyson: Just keep fucking rocking. You rock harder than the Americans, even if you don't buy the records. You guys know how to dance and you guys have rhythm. You're even better than the Japanese. They're like you but without any talking in between the songs.
Nick: They're the most polite crowd, but you are the best overall.

We don't under­stand what you are talking about. Our charts are a bit of a mess but the American charts are all over the place. Which is the most important chart to you?
Tyson: The chart of children's hearts.

That's the chart that will get you into Heaven.
Tyson: Heaven? Where is Heaven? Have you ever asked yourself that?

It is a gay club in London.
Tyson: I knew it! Nick, have we been there?
Nick: No.

If we asked you to tell us your 'Dirty Little Secret' would you tell us a story you've told a million times before or would you make something up to amuse yourselves?
Nick: I don't think we ever answered that question truthfully.
Tyson: Chris used to say that every time he took a shit he got a boner, and that's more of a full on con­fes­sion than a secret if you ask me.
Nick: Did you know that Dr Phil had a show the other day called 'Dirty Little Secrets'?
Tyson: What a fucker.
Nick: One lady's secret was that she cooked Betty Crocker pies and took them to school bake sales and sold them as home made.

What are Betty Crocker pies? And bake sales? And, for that matter, who on earth is Dr Phil?
Nick: They just come in a box. Anyway, on the show Dr Phil was like, 'if that's your dirty little secret then just go home'.
Tyson: That's going out of your way to cheat somebody though. I think that's pretty bad.

Yes, but it's not the sort of thing you'd bother going on TV to confess though is it?
Tyson: Well you're not exactly going to get people going on TV and saying 'hey America, I raped my son!'
Nick: I think people would, just so they could get on TV.

Apart from not buying your best song, is there anything else we should be apo­lo­gising for?
Tyson: Well you did send James Blunt to America, but that doesn't matter, I think sending him over to us in the states was enough of an apology. It was like 'I'm sorry, this is the best we can doâ?¦' You guys started it all, you told everyone, 'this is our Jesus of the singer song­writers' and then pooped him out onto the USA.
Nick: You guys need to shut up because he was in the military.
Tyson: He knows 56 ways to kill a man but only one of them is the way that matters — he can break your heart.

If you were going into war and James Blunt was leading the march, how much con­fid­ence would you have in your captain?
Nick: Is he talking? Because I'd be less confident if he was talking.
Tyson: He sounds like a Dalek. But you know what, I saw him at the VMAs and he looked really happy and everyone was pleased when he got his award but then he ruined it all by saying (adopts squeaky English accent) "and I'll race you to the pub". Don't say pub! You're in the US!

If this war was the war on emo, which side would you prefer to be on?
Nick: I'd just watch. It'd be funny watching a load of guys in tight pants have a fight.
Tyson: We're not anti anything, we just think emo is a joke.
Nick: I just want to know if they take off their big black framed glasses before they fight.
Tyson: Yeah they do, actually — so they can bleed the tears.

Are there plans for All American Rejects to 'Do A Fall Out Boy' and get their bits out on the internet?
Nick: I just wouldn't want to embarrass everyone else in the world by putting my johnson on the internet.
Tyson: Until they build a webpage big enough to scroll far enough down to see it all, I've got no plans to do anything like that. Dude, you'd need one hell of a track ball to see all that…

Thank you for that All American Rejects.

BONUS FEATURE!
Five Facts About Meeting All American Rejects
1. Both Tyson and Chris own the same Nike t‑shirt we wore on the day, although Chris has one in white. Fashion disaster narrowly avoided.

2. They said something brilliant about the whole band showering together as soon as we said hello but the Dictaphone wasn't even out of the bag.

3. Tyson smoked his first cigarette in a year a week before we spoke to him. It was a menthol.

4. Nick gave us some cheese and onion crisps when we arrived and had bacon juice on his hand.

5. Tyson Ritter does indeed appear to have won some sort of 'genetic lottery'.

"Girls like the boybands who dance and move and come close"