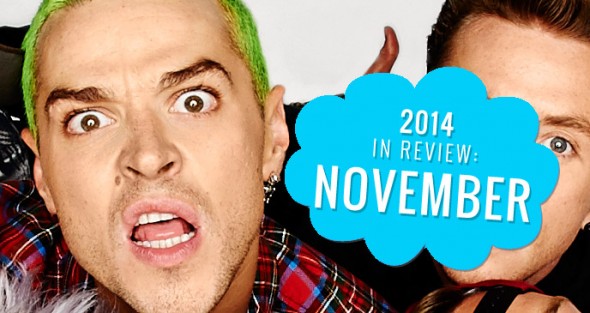 November 2014 was a month in which various things happened in ‘the world at large’. But how did these things impact the sweariest man in all of pop, Matt Willis from McBusted? Well let’s find out shall we.

But what happened to the Beyoncé 'inter­pol­a­tion', Matt Willis?
(Laughs) Good question. You don’t miss anything do you. Right okay. Basically what happened was we used that part of her song, “oh oh, oh oh, oh oh, oh no no”, which was a straight rip off of her song. We were about nine days away from release and suddenly someone said 'you do realise you’re going to have to fucking pay her for that?'. We were like, ‘what?’. They were saying there’d probably be some sort of fucking court injunc­tion or something. Not neces­sar­ily from her but from the pub­lish­ers and shit. We were like ‘fuck, we’d not even thought about that’. We just thought it was like a homage and it would be fun. So we had a panic and went to our pub­lish­ers and asked them what the score was and they said there were four writers on the song so we’d need to get per­mis­sion from all four writers and poten­tially then give them a per­cent­age of the song. We were cool with that because we love the song. They then said that unfor­tu­nately it wouldn’t be a quick process and one of them could just say no and it was looking likely we’d have to put the single back by three to four weeks. We were just like ‘fuck, that is so much more intense than we thought it would be’. We had to get the single out to allow the album to come before Christmas and all that shit. It was just timing issues.

So Beyoncé didn't get to hear it?
No. I think she would have probably liked it. I thought it was a fucking sick line and we weren’t taking the piss, we love that fucking song. It’s an incred­ible fucking song. We just didn’t get time to get per­mis­sion, but we really should have thought about that much earlier on. But as with everything in McBusted, it was all a bit last minute.

Also in November, the title of the new Star Wars film was announced, that title being The Force Awakens.

When was the last time your force was awoken?
Do you know what, I bought this protein powder off the internet and it was a new powder I hadn’t used before and I made a shake after going for a workout and literally straight after that the force was def­in­itely awoken. I had the worst gas I’ve ever had in my life. We had to travel from London to Birmingham in the car and everyone was like ‘fucking hell’. I’m in the gassiest band of all time but it’s never me and funnily enough it’s never James, it’s just McFly. McFly are really stinky boys. It was gross.

The G20 summit of world leaders took place in Brisbane during November. As you can imagine, security was high, with reptiles and surf skis (!) on the list of things banned from the city centre.

If you could ban anything from city centres what would it be?
I ban those fucking charity people. I know that sounds really horrible but I fucking hate it. I hate like (does impres­sion) ‘’ello mate’ or ‘nice jacket’ and I’m like ‘oh thanks’ and then I realise they’re just enticing me into a fucking con­ver­sa­tion where you can make me feel like a horrible person for not giving money to charity. And also my mate used to work for those charities that stop you on the street and it’s all a fucking con. It’s about them meeting quotas so they can get paid.

Do you give to charity in other ways?
Yeah totally. Emma and I are quite into that kind of shit. That’s different though, that’s about feeling a personal rela­tion­ship to a charity or you want to do something where it means something to you, or you just want to help out a great cause, by all means do that but those wacky guys in the street just piss me off. Fuck off!

They tend to be out of work actors.
It could have been me!

In November, the Rosetta spacecraft landed its Philae probe on a comet. AN ACTUAL COMET. It then ran out of batteries.

When was the last time you changed the batteries in your TV remote?
Do you know what, funnily enough, literally just before I left the house I changed some batteries in a monkey’s bum. My son’s got this game where you have to throw these hoops on this monkey’s tail that swings from side to side and it had run out of batteries. So I was screw­driv­ing open a monkey’s bum earlier.

Do you keep batteries in a specific drawer in the house?
I do. Unfortunately I may have put some used ones in with some loose new ones. It’s a shit drawer.

You may have missed this because nobody seemed to have much of an opinion on it, but Taylor Swift removed her back catalogue from Spotify in November, saying she didn’t want to take a risk on a “grand experiment”.

If you could cat-sit just one of Taylor’s cats would it be Meredith Grey or Olivia Benson?
I’m going to come across as such a miserable bastard in this interview, but I really hate cats.

You hate charity and cats.
Exactly. Tom sometimes shows me videos of cats and he’s like ‘dude, you’re dead inside’. I just don’t give a shit.

Earlier we saw a gif of a cat doing sign language for its deaf owner.
No! I mean that’s pretty awesome. Monkeys have been doing that for fucking years though. Cats are fucking shit. My mum had this dog when I was growing up called Max and it just got fucking fur all over my school blazer. It was the most annoying fucking thing in the world. I’ve been an animal hater ever since then, although me and Emma talked about getting one of those micro pigs.

Miley Cyrus has got one of those.
Well there we go, that says it all. I def­in­itely need one of those in my life.

Astronaut Chris Hadfield’s version of 'Space Oddity', which was recorded on board the International Space Station, was allowed back onto YouTube in November after after having its copyright renewed or something.

If you were floating around in space, what song would you cover?
Oh God that’s a really good question. I don’t know.

Is there a song you sing in the shower?
Well I’m obsessed with Taylor Swift at the moment. Like abso­lutely fucking obsessed. I was singing ‘Welcome To New York’ in the shower this morning.

That’s the worst song on the album!
I know! (Laughs) Actually I do like that song. I love that album. ‘Style’ is fucking incred­ible! And ‘Blank Space’!

Maybe do a Taylor Swift medley in space?
I’d do it dressed as her in her ballet class. With her two dead cats.

Also in November, a supermarket in the Netherlands started selling edible insects for some reason.

You ate your fair share of insects while in the jungle, which one would you recommend to a friend?
I don’t know but one of my friends has cricket protein powder. That’s a thing now. He has that and protein bars with crickets in them because appar­ently they have a really good protein balance.

A Turkish company accidentally used a photo of imprisoned al-Qaeda figure Khalid Sheikh Mohammed in an advert for hair removal because they didn’t realise who he was.

Do you think men should have to shave their armpits?
This is a very on point question. No I don’t think you should shave but I do think you should trim down. As a sex we are excep­tion­ally hairy, me more so yearly, so I try to keep things in check. The one thing I was leaving was my armpit hair and fucking hell man my armpits were insane. Everything else was neat and trim and they were wild, so I did that and the other boys found it fucking weird.

If you’re going to trim other areas then why not your armpits?
Exactly. Also more hair would mean you’d smell more and no one wants to smell. I think all over man­scap­ing is a plus. The balls are a touchy subject. It’s an ongoing problem area for me. Too much inform­a­tion?

Let’s move on. Quite successful author JK Rowling revealed in November that the Harry Potter character she hates the most is Dolores Umbridge.

But do you think you would have been any good at Quidditch?
I think I’d be fucking great… Oh no actually I wouldn’t be. I’d like to think I would but real­ist­ic­ally I’m pretty shit at all sports. I was always picked last at school. I was the fucking shit chubby kid with asthma.

You could have done Quidditch perhaps as a hobby in your later years?
Yeah, now I’d be good at it. People fucking play Quidditch, it’s a real thing. I saw it once on The One Show I think. They strap a broom under­neath their groin and they run around and chuck balls at each other. It’s a real thing at Universities.

How are any of them ever supposed to have sex?
(Laughs) Exactly! It’s just a load of really sexually frus­trated people with brooms up their bums.

Finally in November, French academics came up with a mathematical formula to explain why ‘hipsters’ all dress the same. It was all quite boring to be honest.

Do you think the word ‘hipster’ is just used by old people who don’t under­stand youth culture or are they genuinely a bunch of pricks with awful facial hair?
I think it’s one of those things where a line has been crossed. If you think of the original hipster wanker from Shoreditch with a fucking single gear bike and a fucking moustache and cycling cap, that’s one thing, but once upon a time that was fucking cool. Emo hair — as I sported for many a year — was once cool. Everything gets overdone doesn’t it? The thing I don’t get is the stupid fucking mous­taches. Beards are cool and the dress sense is alright, some of it’s fine. I mean, some of it’s stupid but you’re always going to get wankers in life aren’t you. But the mous­taches when they fucking wax the ends and they point up. I can’t get onboard with that.

It’s ruining it for 80-year-old men who have had those mous­taches for sixty years and then they get called hipsters.
(Laughs) Yeah exactly, they live in Yorkshire and drink a specific type of bitter. They’ve never been to Shoreditch.

Thank you Matt Willis from McBusted for that fas­cin­at­ing insight into your thoughts on the month of November 2014. We hope you had a sat­is­fact­ory year and wish you all the very best for 2015. 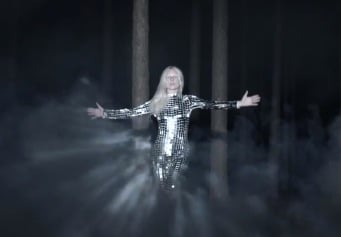