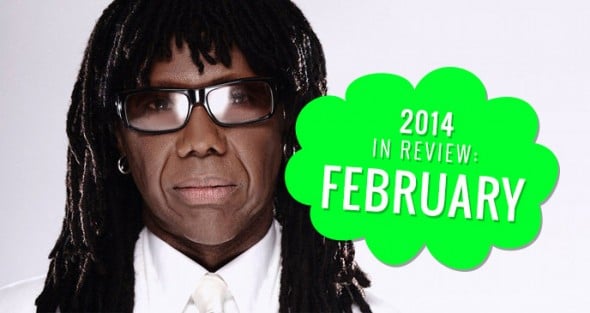 February 2014 was a month in which various things happened in ‘the world at large’. But how did these things impact actual living legend Nile Rodgers? Let’s find out shall we.

In February, Nile Rodgers performed at the Brits with Pharrell a month after performing at the Grammys with him, Daft Punk and Actual Stevie Wonder.

Do you still have 'pinch me' moments?
I have pinch me moments about my career and life every single day. February happened to be a really great month, but so was March and so was January. I get to do what I alway dreamed of doing. When I was a child I dreamed of being a composer and a musician. To think that Stevie Wonder is my friend and Pharrell Williams is my writing partner, it’s totally cool.

2014’s been quite a year for you, but obviously it followed a pretty dark time. Do you think ahead? Can you when things change so quickly?
I was stricken with cancer a little over three and a half years ago, so because of the health issues I don’t think ahead. I really think much more in the present because I’ve learned that these moments are so fleeting. A little while ago my close friend, my guitar handler of many many years, passed away literally minutes before we went on stage. He was ill and I knew he was in a very dire situation but to be told minutes before you go onstage that he’s passed away, I would never have expected that in a thousand years. So I do try and stay in the moment, but I’m a producer so it’s my job to plan.

You’ve recently col­lab­or­ated with most of the pop world. What do you look for in the people you col­lab­or­ate with?
People that I admire, respect and people that I believe that I’m going to learn from. I always go into a situation feeling highly confident I am going to teach them something and it really doesn’t matter whether its Placido Domingo or Avicii, I believe that if I don’t have something to offer you, why do you use me? If I can’t give you something new then why do you need me? I always believe in working with somebody who is going to teach me something.

Seamlessly back to February… Around the Super Bowl, Coca-Cola released a multilingual advert featuring the song 'America The Beautiful'.

How many languages can you speak?
Personally I speak two: English and music.

Amazing. Chic should play the Super Bowl halftime show, surely? Rope in Madonna, Bowie, Daft Punk etc.
Yeah well you know. (Laughs) You know what man, let me just say something to you. This is the truth about Chic. Our whole life has been a battle of swimming upstream against the tide. I guess I’ve grown to accept that and maybe even like it. I wish it were easier. If you go back and look at the film of Daft Punk, Pharrell and myself sitting in the audience at the Grammys, I had told them we were going to lose and that they shouldn’t be upset. And they said ‘why?’ and I said ‘well you know I’ve never won a Grammy’ and they all looked back at me and went ‘what?! You didn’t win a Grammy for ‘Let’s Dance’, ‘We Are Family’, ‘Like A Virgin’, ‘Upside Down’ etc’. And I said ‘no, nothing’. They thought that it was old hat to me. I’ve had a life of huge success but it’s been really really difficult and maybe I like it that way. I don’t go into a project assuming that it’s going to be a hit. I go into a project assuming it’s going to be a failure and then do everything in my power to try and help people hear the music.

In species news, also in February, a possible new species of giant jellyfish was discovered, washed up on a beach in Australia.

Obviously the way to help heal a jellyfish sting is to wee on it…
I know that because it works very well. I’ve been stung many times.

And someone had to wee on you?
Only once. The very first time it happened.

How painful is it?
The being weed on? (Laughs) No but the sting is unbe­liev­ably painful. In fact a few years ago I got stung by a giant sea nettle and the welt lasted on my hand for four or five years. Now what were you saying about jellyfish?

Could you ever urinate on someone who had been stung by a jellyfish?
Quite easily and I couldn’t wait to do it.

Good news for people with hangovers: McDonald's opened their first restaurant within Vietnam, in Ho Chi Minh City, in February.

What’s your favoured McDonald’s order?
Wow. Favourite? I would say I always the same thing — a double cheeseburger.

With a milkshake?
I’m not big on the milkshake thing because I have diabetes. I order the double cheese­bur­ger but I don’t eat the bun.

A number of concerts took place in America in February to celebrate the 50th anniversary of The Beatles and the 'British Invasion'.

Do you think they’re a bit overrated though?
(Silence) The Beatles? You’ve got to be out of your mind. I was one of the people on the stage at that event in fact. The first song I ever learned to play was a Beatles song called ‘A Day In The Life’. That changed the whole course of my entire career.

Have you met Paul or Ringo?
Of course. My girl­friend used to babysit for Julian Lennon which made me Julian Lennon’s babysit­ter by default. He and I laugh about this all the time. We were together recently in Monaco.

Also in February, Shia LeBeouf walked out of the Berlin premiere of cinematic bonkfest Nymphomaniac with a paper bag over his head after becoming involved in a plagiarism controversy.

Have you ever sported a disguise?
No. I’m not famous, I don’t need to.

Really? Do people not recognise you?
They recog­nised me a bit more after ‘Get Lucky’ because you don’t know what Daft Punk look like, you know what Pharrell looks like and they sort of know what I look like. I’ve had a huge amount of hit records well before ‘Get Lucky’ and people don’t really notice me. Chic was always planned to be an anonymous. We based our careers on Kiss because we saw that they were able to put on this great show and then melt into the crowd and be anonymous. We didn’t look like stars or act like stars. When a star walks into a room you can feel it, but when Nile walks into the room it’s like ‘hey Nile, how you doing?’. (Laughs)

In more February news from the animal kingdom, a giraffe called Marius was killed and fed to the lions causing worldwide protests from environmental activists.

Why?
Even though I think giraffes are amazing, I think lions are mag­ni­fi­cent and beautiful and fast and very endangered, so if I were a lion I would like to be the smart one that could out think hunters. I think that killing animals for sport, for me, is a very horrible thing and I think that if I were a lion I’d have a better chance of escaping even though I know I’d be a bigger target. When I was a kid people used to pick on me, I was always bullied, but I could always out-run everybody.

Does this make you sad?
Of course. I’m a car fanatic. I’m a petrol-head.

When was the last time you fell in a hole?
The last time I fell in a hole? I’m not sure I’ve ever fallen into a hole except a meta­phor­ical hole, like when I’ve put out a record and it was a flop. I’ve done that a couple of times.

Also in February, ballroom dancers and people doing aerobics started performing in the midst of an anti-China protest in Vietnam, apparently as a ploy by the government to break up the protest.

What dance move would you pull to end a fight?
I would do a lot of the dances we did in the 70s that involved touching, like the hustle or the bump. People used to do ballroom dancing where they’d touch but after Chubby Checker did 'The Twist', they started dancing apart. When the disco era started, we got back to touching each other. Look at Saturday Night Fever. So I would do the hustle or any of those cool 70s dances where we’re touching each other. I’d dance The Freak! That was the sexiest dance ever.

And finally, the Kepler telescope discovered 715 new planets in February!

Thank you Nile Rodgers for that fas­cin­at­ing insight into your thoughts on the month of February 2014. We hope you had a sat­is­fact­ory year and wish you all the very best for 2015. 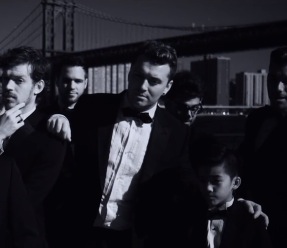 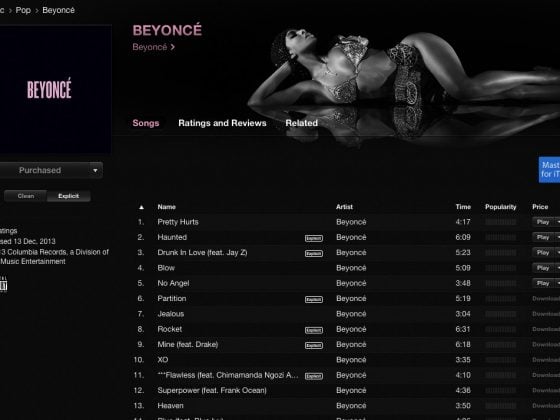 How Beyoncé's created pop panic, and how Taylor made us feel safe