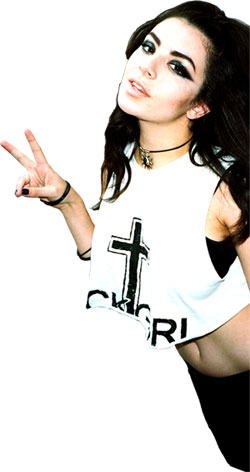 Charli XCX has an amazing new single out, which is all well and good, but we wanted to know about the woman behind the many hit singles.

Where’s the strangest place you’ve ever put your hand?
(Laughs) In one of those black box things where you can't see what's in it.

The title of your auto­bi­o­graphy would be…
It would have been Under The Wig when I was younger.

Is it time for people to stop wearing stripes?
No, abso­lutely not. Beetlejuice is so in.

Have you ever seen a ghost?
Yes.

What is your mum called?
Shameera.

Did you go anywhere nice on your holidays?
I haven't been on holiday for ages. Well, two years, which seems like ages.

What is your favourite chocolate bar?
Bournville dark chocolate.

Which animal would you gladly never encounter in your lifetime?
Crocodile/alligator.

Who is your best friend?
Twiggi, but don't tell Milly, she'll get upset.

What’s the first thing you do when you wake up?
Yawn.

Who do you think has a perfect face?
Christina Ricci in Addams Family.

Are you in love?
Yes.

Could you write Mutya Keisha Siobhan a hit?
Yes, if they'd let me I'd love to.

What’s the strangest thing you’ve ever put in your mouth?
Some food that's been on the floor.

Do you worry about your weight?
I used to, but not anymore.

What did you have for breakfast?
An orange.

Have you done the Harlem Shake?
No but I want to do it right now.

How many pints can you drink before you fall over?
Half.

How do you eat a Creme Egg?
I lick out… Oh hang on, that sounds dodgy. I suck out the middle.

How old is too old for a man to go skateboarding?
Fifty, but not if they're on Venice Beach.

How old were you when you found out about sex?
Either 10 or 12. My dad taught me about it which was weird.

What was your worst subject at school?
Chemistry.

What is the worst day of the week?
Tuesday.

What side of the bed do you sleep on?
The middle.

Surf or turf?
What is that? Is it something to do with sex? Or is it a food thing? I'll go with turf.

Do you ever feel like a plastic bag?
Yes. "Drifting through the wind, wanting to start again".

Do you think fireworks are too loud?
No.

Are you left or right handed?
Right.

How often do you get your haircut?
Never. I've only had it cut about three times in my life. I mean, I had it cut more when I was younger. And my mum shaved my head once when I was a baby.

What’s the best freebie you’ve ever been given?
Some amazing Versace sunglasses, but I lost them two hours later.

What’s the hardest word to spell?
It used to be 'People'. PEOPLE EAT ORANGES PEOPLE LIKE EGGS. But now I'm a pro.

What is the rudest word you know?
I only learned what 'gooch' was the other day. And 'cunt' is rude right?

Have you got any tattoos?
No, only fake ones.

Are you bored of these questions yet?
NO!

If you could force two popstars to mate who would you choose?
It would be Bjork and Robert Smith from The Cure. Imagine that child.

Did you expect the Robbie album to do better or worse than it did?
I haven't heard it so can't comment.

New York, London, Paris or Munich?
Paris, because it's so cool but it makes me feel so uncool… So London.

What does the Daily Mail mean to you?
My parents used to buy it when I was younger but I never read it.

What’s the best day of the week?
Friday.

At what age were you happiest?
Right now. 20.

What’s wrong with pop?
Nothing and something.

What’s right with pop?
Something and nothing.

Are you good in a fight?
I'm good over email.

What word do people incor­rectly use to describe you?
Goth. It's a bit dated.

What word do people correctly use to describe you?
Er, cute?

What is your favourite flavour of yoghurt?
I don't like yoghurt.

What is the most expensive thing you have ever bought?
My laptop. That's not very exciting is it.

What is your favourite fruit?
Kiwi.

Would you rather not eat or not speak for 24 hours?
Speak.

What is your least favourite TV show?
The Big Bang Theory.

What was the last thing you read about yourself on the Internet?
That I'm appar­ently a '#slut' and yes, there was a hashtag.

What is the appeal of Cheestrings?
They're plastic and say they're good for you but they're not. Oh and you can make palm trees out of them.

Would you rather have no teeth or no hair?
No hair.

Why do we have dreams?
Because we're all magical and we think too much.

The red pill or the blue pill?
BLUE!

When was the last time you wet yourself?
Maybe five or six years ago when I laughed so hard some wee came out.

Hollyoaks: a good thing?
No.

What are the names of the people you live with?
Ryan.

What do you have on your bedroom walls?
A mirror and some fairy lights.

Do you pair up your socks before you put them away?
Yes.

What did you do yesterday?
I was in the studio. I made a song inspired by TATU.

What do you say to people who think Jaffa Cakes are biscuits?
Get your facts straight bitch.

Which super­mar­ket do you shop in?
I don't really do that. But there is a Sainsbury's near me.

Where do you buy your pants?
Urban Outfitters.

Which reality TV show do you most want to go on?
The Hills.

How fast is too fast?
There are no speed limits with me baby!

Three words that best describe you in the morning are…
Chubby, because my face swells up at night. Grizzly. Moany.

Have you ever fallen off a bike?
Yes.

What is the name of the first person you kissed?
Rob.

You must be bored of these questions now?
Not at all, I'm having the time of my life.

What was your worst injury ever?
When I watched The Karate Kid and tried to punch the sofa but sprained my wrist.

How much money have you got on you?
None.

Can you parallel park?
No.

How good out of 10 do you think the Beyoncé album will be?
A solid 9.

Which member will be the first to leave One Direction?
Zayn.

Which member of The Wanted would you be most surprised to find out was gay?
I don't know any members of The Wanted.

If you were twice as talented would you sell twice as many records?
I don't know. I think I'd make the same music, so I have no idea.

What per­cent­age do you tip in a restaurant?
15%. I'm really bad though. I always get told off.

What's the song you wrote for Britney's album called?
I'm not telling you!

How much is on your Oyster card?
I keep losing them so I have to get new ones and put £10 on it.

What could you do to get played on the radio more?
(Thinks for a bit) Make Top 40-friendly music? Or play a guitar?

'SuperLove' is out now on iTunes and other reputable outlets.

Miley Cyrus has announced the UK leg of her Bangerz tour 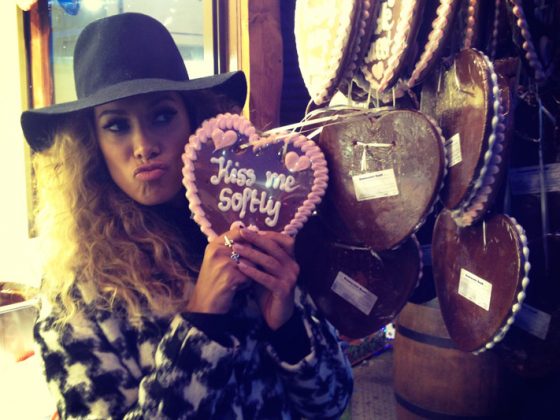