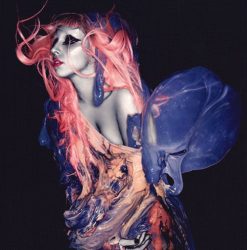 According to The Sun Gaga accom­pan­ied boyfriend Taylor Kinney to the pub for a game of darts last week. 'For a laugh' Kinney and his friends let Gaga throw and lo and behold she wiped the floor with them.

A well-posi­tioned 'source' told The Sun: "There was a load of banter about whether she knew where to stand and where to aim. But after a while all that stopped. She told them she had a mean aim and she wasn't lying. She took half of them down."

Brilliantly, the 'source' goes on to say that Gaga has now been invited to play "as a regular fixture", but this will be dependent on her "music com­mit­ments".

It looks like Azealia Banks will be working with Nicola Formichetti

A Newsdump for 12 January 2012: From Demi as the people's choice to Kelly's Anthemic voice