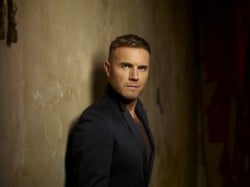 Cocozza sym­path­iser and occa­sional singer Gary Barlow will perform two solo shows in December in aid of The Prince's Trust and The Foundation of Prince William and Prince Harry 'in support of Young People'.

The concerts, taking place on December 5 and 6 at London's 'stunning' Royal Albert Hall, will be Barlow's first solo shows in 11 years and will feature songs "from his incred­ible music career spanning over 20 years."

Unfortunately, the press release does not stipulate if Top 30 smash 'For All That You Want' will be granted a rendition.

HRNK! Amanda Mair UK live date ahoy! THIS IS NOT A DRILL

JLS — Take A Chance On Me