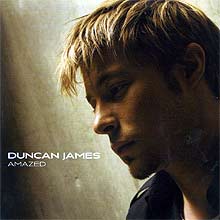 Duncan James is releasing a new single in March. It is his cover of Lonestar's 'Amazed', which should have been the second single but wasn't.

It's basically shit on a stick but we became oddly obsessed with it when the album arrived in the office last year, at one point playing it on repeat for almost an hour.

It might seem odd to release another single now when the whole 'Duncan James goes solo' thing has been such a disaster in the UK charts but you have to remember that Duncan is currently appearing on ITV1's classy Dancing On Ice.

His label have clearly been watching closely how easy it has become to rescue the stalling career of an ex-boyband member by sticking him on a reality TV show.

It must certainly be difficult to look at the example of Matt Willis winning I'm A Celebrity then going on to score a Top 20 single and Top 100 album without fancying a bit of that action.

It is electro, it is pop